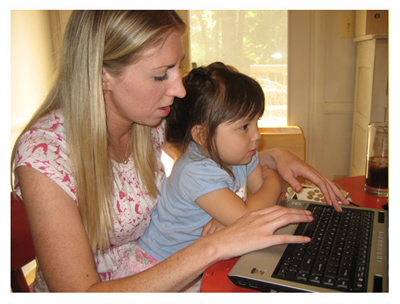 Verbal behavior is B.F. Skinner’s analysis of language, which has been applied along with the principles of behavior analysis to accelerate language development in children with communication delays and disabilities, including autism.  Applied behavior analysis with an emphasis on verbal behavior focuses primarily on various “categories” of language.  Four of these verbal operants are described informally below:

•    Manding – requesting items, actions, assistance, attention, or information.  For example, a child says or signs “cookie”, and an adult reinforces by delivering a cookie.

•    Tacting – expressively naming something you see, hear, feel, smell, or taste.  For example, a child says or signs “cookie” when he sees one, and an adult provides some form of social reinforcement.

•    Echoic – echoing what someone else says.  For example, someone says “cookie” and the child repeats the word, “cookie.

•    Intraverbal – speaking in response to someone else speaking. For example, someone asks, “What did you bake yesterday?” and the child responds, “cookies.”

•    Use of assessment tools designed specifically to evaluate verbal behavior, such as the VB-MAPP, ABLLS, or ABLLS-R.

•    Programming decisions made based upon analysis of data

•    Strong emphasis on the development of functional, topography-based communication, such as speaking or signing

•    A combination of natural environment teaching and intensive teaching trials